To see the expressions that set their face ablaze and the emotions that ran through their posture. Finally. Something in them literally ignited.

It’s darn near inexpressible. Words fall woefully short. What happens in your heart  when you get to see a friend experience something that means so much to them. Something they’ve lost sleep over, worked hard for, and put their resources, time, and energy into. And then to see it become more and more realized and actualized. Their receiving becomes a gift of priceless, insurmountable measure. The joy I felt watching them embrace and possess  this moment, is like better than… I can’t fully explain.
—

—
Green light means go.
On Nov  4, ABF opens for Pandas and People at Hodi’s Half Note in Fort Collins, CO.
—
Unspeakable  joy threatens to burst out in unbidden rejoicing for my friends.  I can’t help but feel I’m getting  to witness the beginnings of a tidal wave just out on the horizon. What it may bring, one can’t be certain but its the edge of something. It’s got energy building and what will bloom in it’s wake I can scarcely imagine.  But I’m excited to watch it roll closer, the thrill and electric crackle of discovery hang heavy in the air.
For some reason this seems momentous. One more step in a direction.  A larger platform for More life, more joy, and more love to be given and received.
Part of the fun is in the waiting to see what it brings.
—
I wrote the above a little over a month before Hodis. I had no idea how incredibly real that image would be.  I’ve rejoiced and sorrowed with many people in my life, but  in some ways, a deeper rejoicing of this sort,  I’m not sure I’ve ever known.
Hodis was incredible.  A Brother’s  Fountain packed the venue.  A photographer. A Videographer. And a room full of friends and fans.
—

—
The energy  and momentum that began to roll through their fans at Equinox, carried itself into Hodis. A Brothers Fountain music  and sounds become tighter, deeper,  richer, and continually more vibrant. All of them were all smiles, all in. And for this space in time,  it was like seeing them become everything  they are, highlighted and elevated, their gift a treasure trove to all who came to witness and partake.  It was a feast for the soul of exceptional quality. I stood in the crowd,  surrounded by adoring fans of these guys. Their music and message has attached to people’s souls. The love for these guys that emanated from the crowd, was rich and profound. “These guys and their message need to become famous” I heard some one yell in their excitement!  This entire venue was full of people who have in some degree been touched deeply by the magnitude of love these people carry  and give  freely everywhere they go. Their fans, ushered into and receiving.
The crowd went wild  jumping at every chance to interact with the music and moments. Pieces of songs continually echoed and chanted, even long into the days that followed this night.
—
“… peaceful, joyous, unconditional, and victorious love….”.
—

As I stood among these people, just one of so many partaking  of this feasting. I felt extremely small, insignificant lost in the vastness of it all. Layers I can’t even begin to fathom flowed through the people who came.  I literally had to stifle a threat of tears as they began to pool in my eyes. This was monumental. 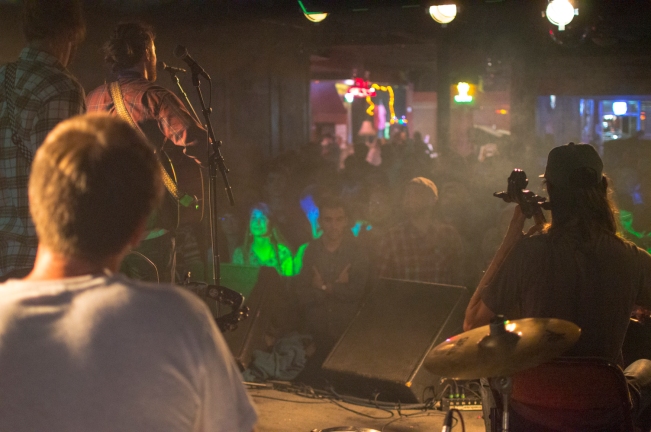 —
I felt something crack open.  I felt in my heart things are about to change. This night revealed  so much. It’s hard to believe what may be coming in its wake. It’s truly almost unimaginable and as I try to imagine it, it’s  a moment of reckoning.   I’m gonna treasure in my heart these days. It meant so much to get to witness and be even a small part of it. Im thankful to know and be known by this crew.
And as for that title wave that’s been building on the horizon… I’ll be watching it break all the way to the shoreline and out beyond. Ill watch it break the natural boundaries  of the sea, sweeping onto dry land, catching up all those caught in it’s path and carrying  everything along with it wherever it may end up going.
—
Blog Post By
Maranda Shively
Photos:
Tony Brown | www.FiYNProductions.com